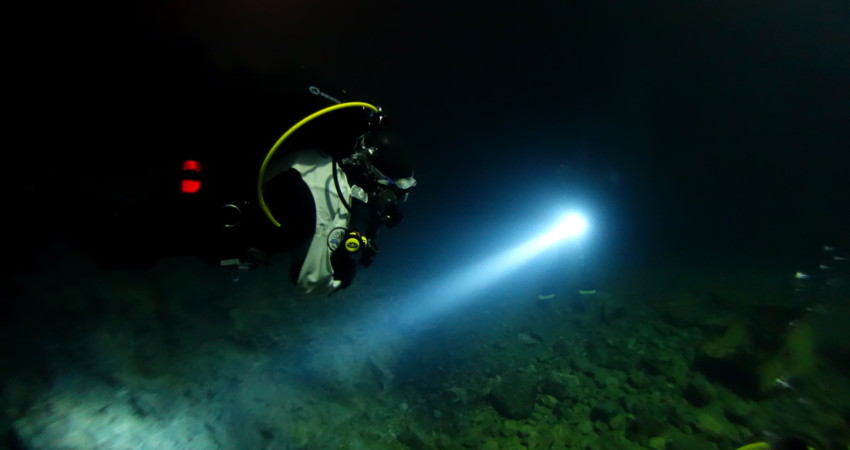 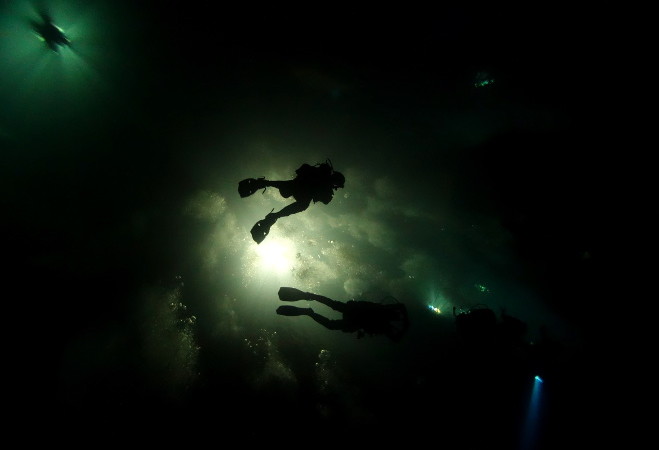 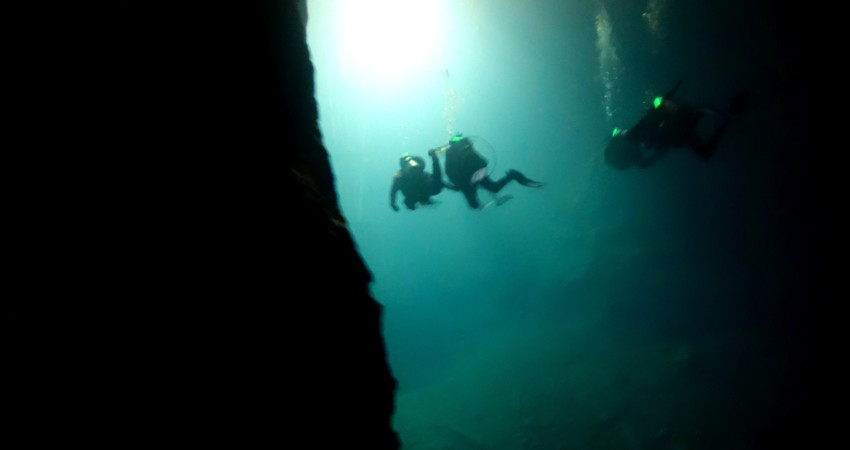 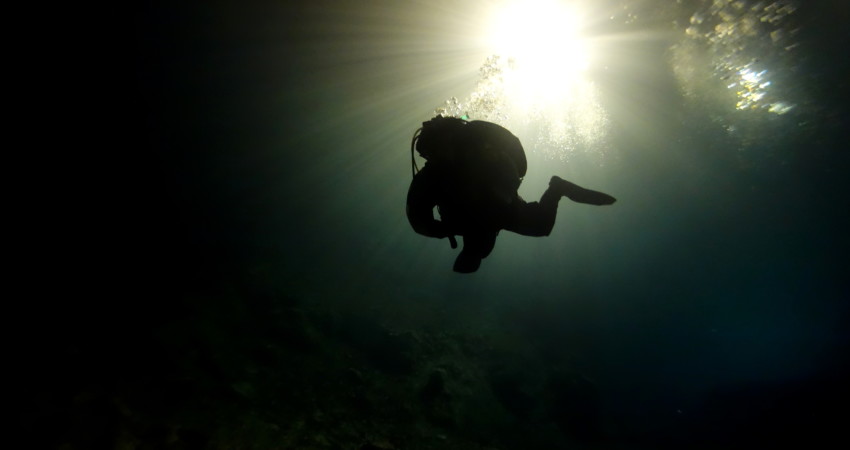 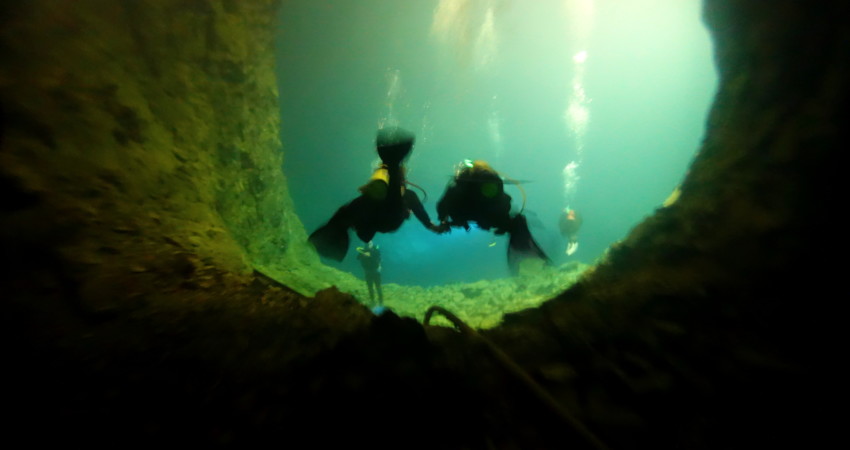 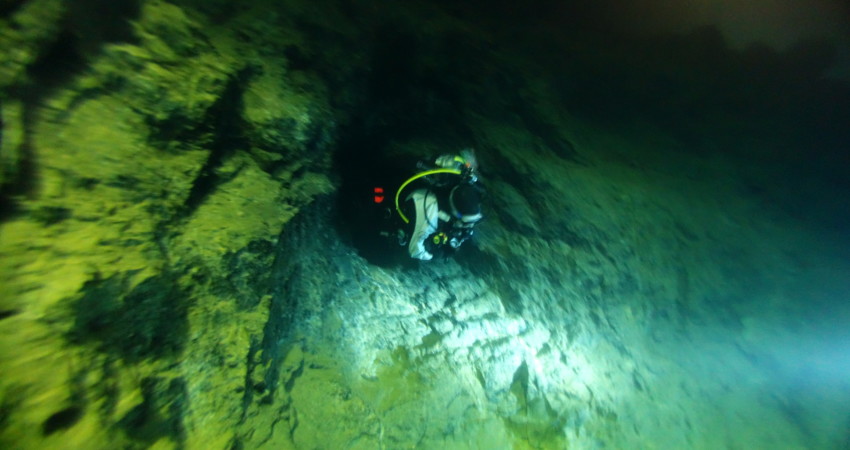 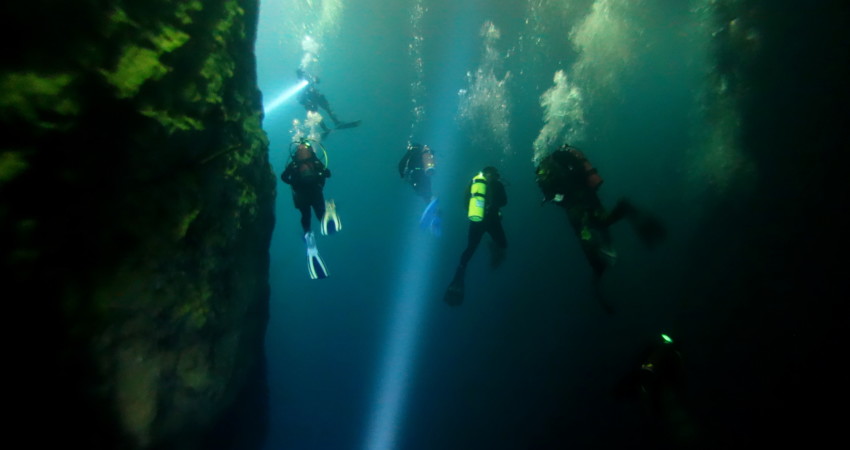 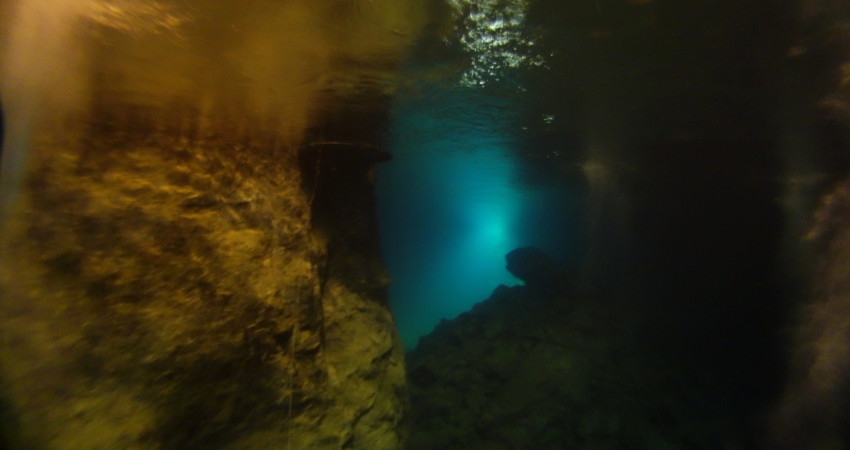 Driving into the sleepy town, it’s hard to imagine that not far beneath the wheels of your car is a billion-gallon underground lake, Bonne Terre Mine. One that you’ll soon be jumping into.

Over the course of a century, miners carved, chipped and drilled their way under Bonne Terre, creating Bonne Terre Mine. At some point during their work they hit water, and pumps were installed to stop the mine from flooding. Finally, in 1962, they turned the pumps off and the man-made caverns silently filled with crystal-clear water, preserving the mine and all of its abandoned equipment like a time capsule, and creating a one-of-a-kind dive site in the process.

Once a booming town thanks to the mine, Bonne Terre’s history is still on display on its quiet streets. My dive buddy and I elected to stay at the old train depot-turned-bed and breakfast, owned and operated by the same folks who run the dive shop,West End Diving. It’s quaint, cozy, and comfortable, as well as affordable.

The mule trail leading into the mine is thusly named because mules were used to move equipment in and out of the mine; this ¼-mile trail is one of the main reasons the new mine owners were able to turn the mine into a dive site.  No need to worry about your tanks though, since you’re required to use theirs and they’re already at the bottom of the trail, along with weights. Just remember, on your way back up, that the trail itself and all of the mine’s caverns were carved with hand tools.

At the platform, guides are busy filling tanks and directing divers. Water drips from the cavern ceiling, adding to the billion gallons that are already part of the dive site. There’s nothing fancy down here; the dock and surrounding areas are wet and the lighting, though plenty sufficient, is not exactly bright. Aside from tanks filling, all you can hear is the dripping water and the chatter of the other divers.

Once you’re geared up, your dive guide — each of whom is a volunteer — will give you the go-ahead to get into the water; they’re pretty strict about who gets in the water and when. When you consider that there are 88 square miles of caverns and underwater trails with a maximum depth of over 300 feet, it’s no surprise that they keep a tight rein on the divers. In that vein, all divers are tested for general competency. They’ll want to see you flood and clear your mask and share air with a buddy. Guides will want to ensure that everyone has mastered basic skills before taking them into a semi-dark and occasional overhead environment.

On our first dive we started with Trail No. 1. Divers must progress sequentially through the trails, so keeping track of your dives here and getting them signed is important if you want to do every trail. No flashes or lights are allowed on the first few trails, but they aren’t really necessary and their absence keeps divers from venturing off on their own and getting lost.

Despite being lit by more than 500,000 watts, diving here is somewhat akin to diving at dusk, with some very dark areas here and there. Photographers won’t be able to get those brightly lit shots they might be used to, but they will get some amazing silhouettes and haunting images, made all the eerier due to the limited light. In most places divers won’t be able to see the bottom, and instead will be suspended over inky darkness as they glide into swim-throughs and around massive columns of stone. In the areas where the bottom is accessible, divers can see and touch abandoned mining equipment, and glimpse parts of mining structures such as elevators and railways. As you’re swimming around, note that some of the underwater scenes fromThe Abyss were filmed in these waters — the challenge is figuring out which areas were on the big screen.

The mine is only open to divers on Saturdays and Sundays, or else we would have stayed for several more dives. As such, if you want to progress through all 28 trails, prepare for several weekend visits.

Water temp is in the mid-upper 50s – lower 60s.  So dress accordingly!